We boarded the train for the trip back with our little white paper sack full of fudge samples (samples graciously cut by a friendly gal who teased us about how much of a taste we were actually going to get of each one….)

We pulled out of the station – on our way ‘home’ now… 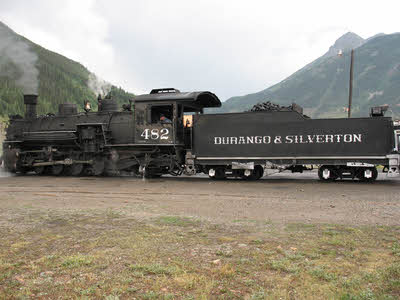 Our trip back was not as chock full of non-stop narration as the trip up – apparently, the reason you are informed to buy fudge is the sugar/caffeine helps to keep you awake on the train ride home.  Our Historic Guide for the trip home was Otto Mears – orphan, immigrant, entrepreneur, toll road and railroad baron extraordinaire – while I immensely enjoyed our trip home, it was less about our guide standing at the front of the train filling your brain with more facts than you may ever recall and more about one-on-one visits with passengers, as he walked up and down the aisle to visit, enquire, enlighten – – And he admitted to being pleased so many passengers hadn’t nodded off to a nap yet, when we were half-way back to Durango…  🙂

Because we sat on the same side of the train as we did coming up, there were some different views to snap pics of, in between visiting with Otto about his character, his real life and the fact that Otto’s original home is for sale, right now, in Silverton, but probably out of my price range, since the previous owner restored it and built an observatory in the back which he allows local students to tour/use…. 🙂  Also, interesting fact – the man who plays Otto Mears 100 years later, has a life filled with places lived, careers followed that eerily follow the steps of the orignial Otto Mears – and, when asked to participate in a Heritage walk of the Hillside Cemetery, celebrating Otto Mears, held on the anniversary of Otto Mears signing up for military duty nearly eight decades later, our guide was glad to say yes – he thought it a fitting way to spend his birthday…

The serendipity of the Universe never fails to amaze me  – –

On to the pictures – first up, the rock slide as result of ages of avalanches/mud slides that holds the rusted remains of one red and one orange car that failed to keep to the corner while traversing the Million Dollar Highway outside of Silverton – because I didn’t zoom in like I should have, I put yellow arrows in for you to see – the actual roadway they went off of is located far, far up in the right hand corner – or maybe, I didn’t even capture the actual roadway – – 🙂

Next up, a calmer view of the Animas and a beautiful, historic bridge –

And last, but by no means least, a picture that doesn’t do justice to Santa’s reindeer that live year round here, because the Durango-Silverton runs the Polar Express during the holiday season, don’t ya know – – 🙂   The winter runs do not go all the way to Silverton, but still, you get to see the route in all it’s white splendor!

The picture I took of the reindeer zoomed in,  was blurred as we were picking up speed – so look at the upper right corner of this one for a glimpse of Santa’s Helpers!

Somewhere along the trip home, Mom and I decided we were so well fed today, maybe all we needed was a small bite before retiring for the day – – the Diamond Belle Saloon has a wonderful Spinach-Artichoke dip, accompanied by a  local band that has been playing country and blues there for over 26 years – so we returned to the Diamond Belle, ate, drank and let the music of the greats wash over us – – –

Returning to our comfy room, we double-checked next day’s itinerary and planned on what time to leave for the place I’ve spent nearly 30 years trying to get to  –

Yup, I used to tag things better than “Musings”

Archives- (if you want to see “How Long? How Active?”